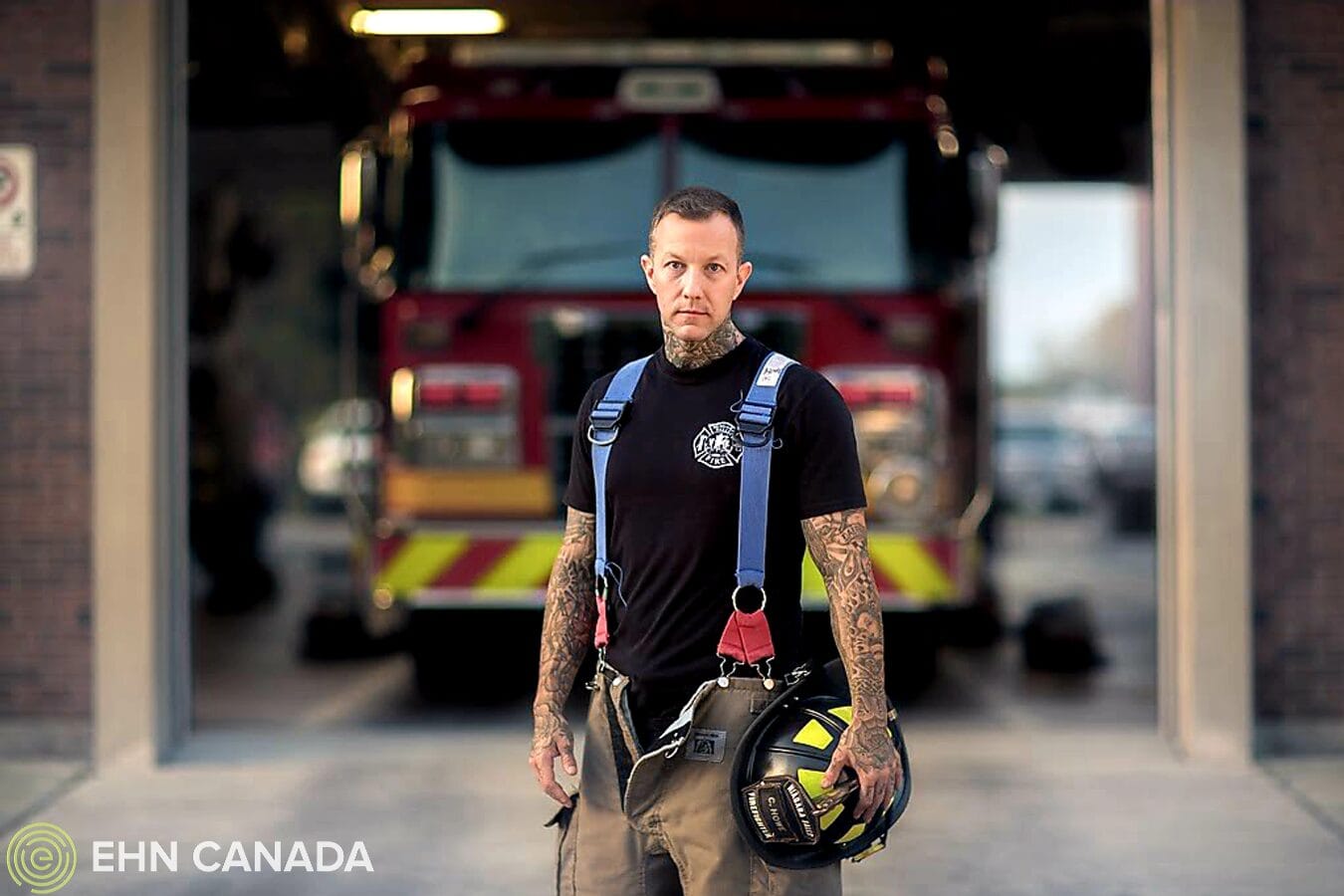 Eight years ago, Christopher Howe hit rock bottom. He was addicted to alcohol and drugs. He felt alone, desperate, helpless. He also thought about suicide.

“I was in a deep, dark hole,” he said matter-of-factly in a presentation at Fire Rescue Canada 2018, the national conference of the Canadian Association of Fire Chiefs, held Sept. 16 to 19 at the Westin Hotel in Ottawa. “My heavy drinking experiences ended up looking like blackouts. When I went out with the guys at work, I never knew what I was going to do.”

Howe, now an acting captain in the Niagara Falls Fire Department, was at the conference to provide a personal, no-holds barred account of his battles with mental health, alcoholism, drug addiction and his journey to recovery. He hopes that his experience and story of recovery will help others in a similar predicament and raise awareness in the fire service community about the true nature of the diseases.

He spoke to an audience at a breakout session at the conference called Unmasked: A personal journey through mental health and addiction in the fire service. His account was straightforward and unabashed.

“I suffered from mental health issues from an early age,” he explained. “When I took my first drink, all my issues were washed away. I found a lot of acceptance through alcohol and drugs. I knew myself I was an alcoholic and had been dealing with it for quite some time. I was living a bit of a double life.” He often felt depressed, anxious and fearful. When that happened, he’d turn to the bottle or drugs. It started when he was 13 or 14, just after he began high school. “I chased that feeling for a lot of years. Even though the attention I was getting wasn’t the right kind of attention, I took a shine to it and kept chasing that feeling, and that feeling like I belonged somewhere.” The drugs, specifically cocaine, allowed him to overcome his mental health issues. When he drank, he did it to excess. “I don’t know what it’s like to drink and not black out. Even with my first experience with alcohol it was almost instinctual that I drink until something in my brain shuts off. “Blackouts became a regular thing and I enjoyed it for a long time because I wasn’t responsible for the things I did or said.” Eventually his addictions took their toll. Howe said he became anxious and jittery from alcohol and drug abuse. He was ashamed and disgusted with himself.

“I was just trying to live this double life and keep the secret.” At work, he was moody. He lived in constant fear of being found out. At home, he’d think about killing himself. Eventually, he stopped hanging out with the guys from work. “I lost the respect of a lot of guys in my crew and in my department for actions and reactions. When I was sober, I didn’t want to be sober and I was very reactive. I was volatile. I was like Dr. Jekyll and Mr. Hyde and that’s not the way you’re supposed to treat your co-workers or your family. “At one point, he took all the mirrors out of his house because he didn’t want to face up to what he was doing.

“I was treating my body very poorly, but I actually despised my body and what I’d become. Over the years of drinking and using, things got progressively worse.”

While on the booze and drugs…

While on the booze and drugs, he didn’t sleep. “I didn’t want to see what I’d become so I took the mirrors off the walls and nobody was allowed to come in and see what was going on. “Internally I was suffering so badly, but I had nowhere to go for this,” he recounted. Howe told the audience that firefighters aren’t supposed to show weakness, which made it more difficult to ask for help. “I didn’t want to show it to the guys at work,” he said. “I wanted to show the guys at work I could be a heavy drinker.” Firefighters are supposed to be strong, said Howe. “The stigma of asking for help in our line of work keeps a lot of us sick.” Howe simply wanted to walk the line and be the life of the party. He said he knew people were talking about him, about the amount of time he took off sick, but he couldn’t admit it was a problem. “The emotional turmoil and feelings of guilt, shame and remorse I felt, I couldn’t admit to anybody because I didn’t want to feel weak.”

He told the audience he became isolated and, at work, would joke to make everything seem like it was okay. More and more, the minor calls that didn’t bother his co-workers began taking their toll on him. “I kept it in and stuffed it down like I thought I was supposed to do. That compounds the problem and makes it a lot worse.” He tried suicide three times, mostly as a cry for help, and was considering a fourth attempt when it hit him.

He’d sat down with a paper and pen and was writing out the ways he could take his own life. He wanted to do it in a way that wouldn’t hurt and as he was writing it struck him. “It was the most terrifying moment of my life,” he said, recalling how he got hit by a wave of emotions and decided he could no longer go on that way. “In my mind, I don’t know that I truly wanted to die, but I knew I couldn’t live the way I was living any more. I needed to change and that was the easiest way out at the time. Up until that point, I wasn’t truly willing to ask for help and mean it.” In that moment, he began to think about recovery rooms at hospitals where people were glad just to be alive. He put the pen down and sought help.

“I finally reached up for help and when I did there were thousands of hands to help me out of the hole.” He started going to recovery meetings, used his benefit program at work and met with his doctor, a psychologist and psychiatrist, and talked to colleagues. That was eight years ago – the day his journey to recovery began. It was the last time he took a drink or drugs. He made the decision to turn his life around and rebuild himself by getting in shape and meeting new friends. He also went to work and told his co-workers he had a problem. “I expected for everyone to shake their head and say, ‘You’re a failure,’ but I found I had support around me. I was so scared to admit this one simple thing. It was the hardest thing to do – admit to everyone at work I had a problem.” Everybody was supportive.

“Everybody had a piece of helping me get up to par where I needed to be and that process of showing some humility and asking for help brought me a lot of kinship as well as a little bit of respect.” He said his co-workers came together and helped him. Today, Howe talks to people in his profession about his journey in hopes of encouraging others in a similar predicament to seek help. “I feel I’ve got a lot more confidence in my skills and myself. I’m definitely a more productive firefighter as well as just a person
in general.

“A big thing for me now is that I have the capacity to help others and that’s a big thing for me, so I want to be a resource to people I work with.” Howe said firefighters should reach out if they need help. “I don’t think enough people are speaking up about this. We’re supposed to be a family, so why aren’t we treating each other like that?” During the breakout session, Howe said he believes the fire service needs to get people talking and thinking about addiction problems.

“The first step is that by admitting you have a problem you’re showing a great deal of strength and fortitude by asking for help, and that’s the only thing that you have to do alone. Once you ask for help, you’ll have help and allies and an abundance of people who will help you with your recovery. “The main message is that you don’t have to live this way any longer. There’s much more to life and all you have to do is reach out for that help. It’s the hardest thing to do, but it’s the only thing you have to do alone.”

Howe said firefighters need to talk about lasting problems they might have as a result of the work they do. “The more dialogue that we can have that’s not surface level and is emotional, the healthier we’re going to be.” These days, when his crew returns from a call, Howe said he makes it a point to ask if everybody’s okay. “To check in with each other is imperative to a healthy lifestyle at work,” he said.

Editor’s Note:
Christopher Howe shared his story in a podcast with Fire Fighting in Canada editor Grant Cameron. The podcast is at https://soundcloud.com/user-381015363/oct-5-road-to-recovery.

Original story can be found at Firefighting in Canada