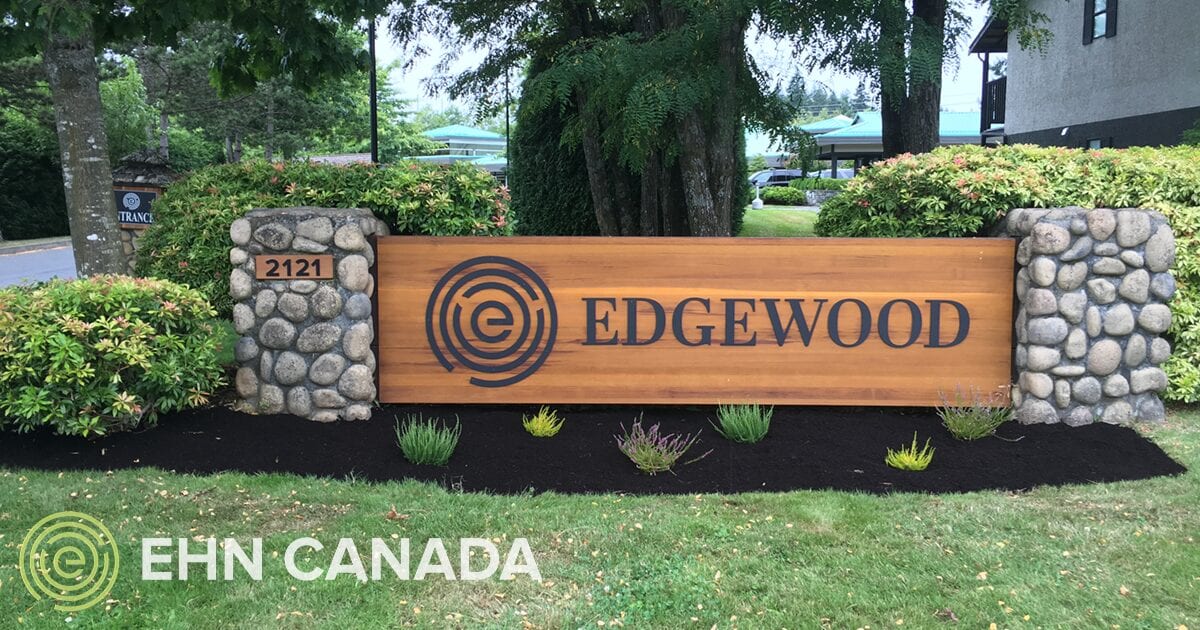 Twenty-five years ago, in Nanaimo, BC, Edgewood was getting ready to open its doors and welcome individuals, families, and community members seeking help with substance use and mental health disorders. Although this massive undertaking was a team effort, it would not have been possible without the heart and soul of Jane Ferguson and her husband at the time, Neal Berger. Their vision to open Western Canada’s first private treatment facility was supported by the Vancouver Island Chemical Dependency Society along with forestry industry leaders such as MacMillan Bloedel and the International Woodworkers Association members, and the trust of RBC and Weldwood of Canada.

On April 25th, 1994, this dream became a reality as Edgewood officially opened and began welcoming patients. Within three years of Edgewood’s opening, over 1500 patients had come through the doors. By 1998, Edgewood had grown to 54 beds with an expanded extended-care program. Edgewood also developed strong relationships with corporations, unions, and EAP’s to address addiction and substance use disorders in the workplace.

In the year 2000,  Edgewood received its first 3-year CARF accreditation and still continues to maintain 3-year accreditation status, demonstrating its commitment to improving quality of care for our patients. People were coming to Edgewood, receiving effective treatment, and successfully achieving recovery. But substance use disorders were becoming more complex and approximately 40% of Edgewood patients were presenting with concurrent psychiatric disorders such as anxiety, bipolar disorder, and depression. This growing need for specific expertise led Edgewood to secure a full-time ASAM/ABAM doctor and a psychiatrist: Dr. Gary Richardson, Medical Director, and Dr. Mel Vincent, Director of Psychiatric Care.

In 2002, Edgewood completed a large expansion to better serve the needs of our patients. It included a new lecture hall and the new west wing, providing 80 residential beds and 30 extended-care beds. Rascal’s coffee shop was also part of the expansion, giving our alumni a safe place to which they could always come home and stay connected with staff, peers, and fellow alumni.

On Friday, August 29, 2003, tragically, Jane Ferguson, 49, her partner John Collison, her niece Kirsten Ferguson, and her beloved dog Rascal all perished when John’s de Havilland Beaver float plane went down near Penticton, BC. This sudden and unexpected loss was felt deeply within the Edgewood family and its close community, yet the commitment to helping others in Jane’s honour was unshakable. It is a testament to Jane’s vision that her staff rallied, maintaining their focus on patient care as she would have wished.

In 2012, Edgewood opened a new residential building, located on the Boxwood Road property, named in honour of the late Jane Ferguson. The Ferguson Building is the current home to the Extended Care Program, our new Concurrent Trauma and Addiction Program (CTAP), as well as our outpatient services. The Edgewood Nanaimo campus now covers nearly 10 acres and offers residential programming, trauma-specific programs, family programs, as well as outpatient services.

In 2014, Edgewood underwent another expansion, this time a collaborative meeting of the minds, that led to the inception of the Edgewood Health Network (EHN Canada).

We are proud of our humble beginnings, but are also delighted to be part of the evolution of Edgewood and EHN Canada as we look to further growth and development of our programs. In addition to our tried and true program, Edgewood now offers:

We believe that a balanced combination of evidence-based and holistic treatment modalities, designed to complement a 12-step-friendly approach, will give our patients the best chance for achieving and maintaining successful, long-term recovery.

Today, the Edgewood Nanaimo campus features a pond, a water feature, and a beautifully architected outdoor labyrinth. Our services include residential programming, trauma-specific programs, a specialized compulsive sexual behaviour program, family programs, as well as various outpatient services.  Edgewood employs approximately 155 staff members and has had the privilege of working with over 19,000 individuals and their families.

Under the guidance of our senior leadership team and our current Executive Director, Dr. Christina Basedow, today, tomorrow, and always, our goal remains the same—to continually provide the best possible patient care to those who put their trust in us. We thank you for putting your trust in us and we look forward to developing strong supportive, collaborative, and professional relationships in the future.

We hope to see you at some of our 25th Anniversary events!