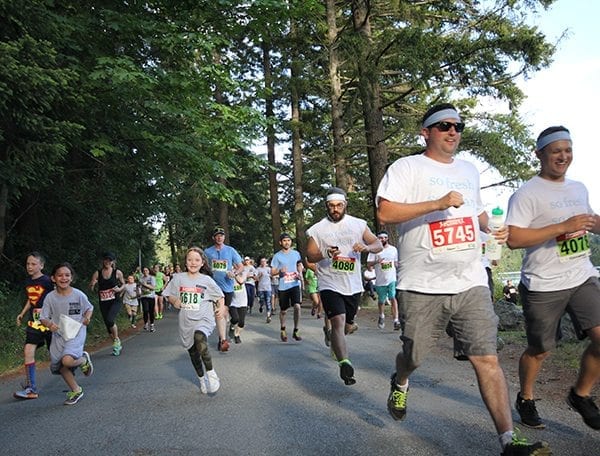 Thousands are already part of the Edgewood Treatment Centre family. But one seven-year-old member is doing plenty to make sure that family keeps growing.

The seventh annual Run For Recovery, a twilight tradition along the comfortable mulch shores of Nanaimo, British Columbia’s Westwood Lake, is set for another instalment next month.

On Friday, June 23, alumni, staff, their family members and members of the Nanaimo and Central Vancouver Island community at large will come together to raise funds to combat addiction and raise awareness that recovery is possible and available.

And if you are connected to the Edgewood Health Network, or if recovery advocacy is your thing, then if you’re on Vancouver Island in June, come on down!

This year’s Run For Recovery features all the perks that have helped raise over $100,000 in the first six years of the event. First, there’s the food – what would a warm evening out on the lake be without scrumptious food? Throughout the event, Edgewood’s own Bridges Dining Kitchen crew will be under the big tent on-site, flipping burgers and hot dogs. A high-end Silent Auction features all sorts of items and events: BC Lions football game getaways, fishing charters, Harbour Air flights, items, gift baskets and certificates from local businesses, and more. While fun bidding battles get going over the big packages, there are plenty of little skirmishes on the dining, golfing, arts and other categories of gift items too – all for a great cause, and all in great fun.

While music sets the mood, the family atmosphere always includes a competitive side of the event. Though many people choose a leisurely walk with their children and/or pets, some have a lot of fun trying to beat their run time from years gone past. Others just try to beat their buddies. Either way, there will be prizes awarded for fastest times in Men, Women, Youth, Family and Team categories. And for the zanier, outside of the box crowd, prizes will be awarded for Costumes.

A Bouncy Castle donated by an alumnus keeps the little ones giggling, while face-painted youngsters grin and wander about. All in all, it’s a full-on Edgewood family fun event.

The sobering message behind the event, however, is not forgotten in the fun, given the brutality of the current opioid crisis across the province and in the Central Vancouver Island. Last year, 912 died in illicit drug-related overdoses, 153 of them on Vancouver Island. In the first two months of 2017, another 219 more are gone, 39 from the Island. This March alone there were 120 suspected drug overdose deaths in B.C. – up 51.9 percent from the previous March, according to the BC Coroners Service, most between the ages of 19 and 50. The Times-Colonist Newspaper reported last month that although more than 7,000 Naloxone kits have been distributed on the Island, in the past 13 months there have been over 1,676 overdose-related emergency room visits.

In years past, the funds raised from Edgewood’s Fun Run have been targeted to the Edgewood Foundation, educating people about addiction, and clearing the way for free treatment at Edgewood for several fortunate applicants. But this year, given the critical situation with opioids, Edgewood has teamed up with the mid-Island chapter of the Canadian Mental Health Association and their efforts to combat the crisis.

With its vision of mentally healthy people in a healthy society, the CMHA will celebrate its 100th anniversary in 2018, as a nation-wide leader and champion for mental health.  The CMHA’s mid-Island branch provides mental health promotion and mental illness recovery-focused programs and services for people of all ages and their families. Services include housing and homeless outreach, employment support, a social centre in Nanaimo and a frozen meals program in Courtenay.

“Given the seriousness of the opioid crisis, it just seemed like the right fit to team up with, and donate the funds raised at the run, to CMHA,” said Colleen Ward, director of the Edgewood Health Network’s western operations.

With this family fun event set, a great cause to get behind, and a location like no other in the central Island, the benefits of taking part in the Edgewood Fun Run can’t be beat.

The whole event costs a grand total of $30 per person, with a check-in time of 6 p.m. for the 7 p.m. race start. Please consider helping out by registering early, and if you have a smashing gift idea for the Silent Auction, please donate it by calling Bonnie at Edgewood at 1-800-683-0111 or 250-751-0111. Call the same numbers to register or go to www.events.runningroom.com for more information.