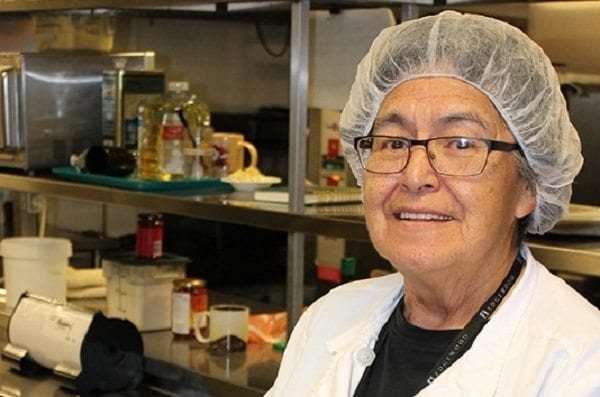 One of the great characters of Edgewood is leaving.

After warming hearts and filling tummies of vulnerable patients for over 15 years, Shirley Bob has decided it’s the right time to hand in her cook’s whites.

The Snaw-naw-as First Nations elder is 70, and is frank about the reasons for packing it in.

“My body is giving up. My hands. The orders that you have to put away, picking up the boxes of carrots, potatoes, celery, onions. I suffer two days later with sore arms, and my hands are beginning to cramp. And my legs too. My body is saying enough. Go home now.”

With her quick smile and sarcastic wit, Bob started at Edgewood in the maintenance department in 2002, but was quickly moved by the late Jane Ferguson, founder of Edgewood, to the kitchen. Bob had an extensive background in cooking, having completed the year long Cook Training Program at Malaspina College (now Vancouver Island University) in 1982.

It was clear from the get go she didn’t quite know what she was getting herself into when she showed up at the House of Miracles, as Edgewood is affectionately known.

“I seen it in the newspaper. And I said to myself, hey if I get my foot into an old people’s home I’m happy. So I come here and I see, wow, the doors are locked. I come in and I say good morning to one gentleman. He grumbled at me. Wow, happy people, hey?”

“I worked one month as home making, (maintenance), until late Jane spotted my papers and threw me in the kitchen,” said Bob.

Bob brought a diverse and often called upon presence to the kitchen at Edgewood, now called Bridges Dining. As a First Nation elder, and someone very active in her culture and traditions, she offered a unique bonding opportunity whenever patients with aboriginal backgrounds came into treatment. Her story, and her ancestral lineage are fascinating.

Bob was raised on the Snaw-naw-as reservation in Nanoose Bay, B.C., about a 15 minute drive north of the treatment centre. The Nanoose First Nations, located between Nanaimo and Parsksville, includes a population of 210 Coast Salish people on the reserve and at least 60 off reserve. The traditional territory of the Nanoose people comprised of more than 3,000 hectares, though the reservation includes roughly 50 hectares.

She is the daughter of the late Thomas Edgar Bob Sr., a hereditary chief held in high regard of the Coast Salish people. He passed at age 91 in 2004. Her father’s father, Snaw-naw-as Bob, was also a hereditary chief.

“Hereditary chiefs carry the responsibility of ensuring the traditions, protocols, songs, dances of the community, which have been passed down for hundreds of generations, are respected and kept alive. They are caretakers of the people and the culture, according to Bob Joseph who explained the position in a 2016 blog post at Indigenous Corporate Training (www.ictinc.ca).

As the daughter of a chief, Shirley Bob likes to remind friends playfully, she is in fact “a princess.”

She was raised with four sisters and two bothers, and has two sons, five grandchildren and two great grandchildren of her own. Two other sons have passed away.

Though there was alcohol in her upbringing, it was not as damaging to her as some of the harshness she and her siblings were experiencing outside of her home.

“We lived on the reserve. We tried coming this way, into Nanaimo, to go to school, but they were too prejudiced. Parsksville wasn’t. So we went to school that way. Parksville was really good. They treated you like human beings – except when you were competing in sports,” she recalls.

But alcohol did become a factor in her life. She won’t go into details about it. Suffice to say  “It was in my family. Still is.”

At one point in her 20s she became an addictions counselor for her people, having been through an intense training program at Kakwis on Meares Island, off Tofino. The facility was on the site of the former Christie Indian Residential School. She would take clients to workshops to help them deal with their issues. She would also go on to work for two years at the First Nations treatment centre at Tsow Tun Le Lum on her reserve.

At age 33, looking at the face of her youngest son, Shirley faced her own addiction issues.

“I’m looking at him and I say my son can’t grow up like this. So I quit. Just like that. I shut it down,” she says. “I did it for my son. I did not want him growing up smelling ashtrays or the stink of stale beer spilled on the floor. Or having to pick up empties.”

To a thunderous applause, in 2006 she accepted a 25 year medallian at an Edgewood Cake Night celebration. She remains abstinent to this day.

Bob spent many years cooking for cultural gatherings in the Long House on the reserve, as well as in Big Houses in Nanaimo and Chemainus Bay. She likes to tell the story of how in the 1980s, she and two other women were once chosen to be part of a major celebration of First Nations culture held for thousands at BC Place in Vancouver. Arriving at the big dome from her little reservation with a belief that she was pretty good in the kitchen, she found her brothers and sisters from other tribes were more than capable themselves.

“I knew how to clean fish. I was watching and they would (swish sound), skinned it. I said may I try that, they said nope. They wouldn’t let me try that. All they wanted me to do was to cut the ends off that they didn’t need – the fins and that. One man said “Can you do that without hurting yourself?” I looked at him and said are we being sarcastic? He said “Yeah. Can you take it?” I said oh yeah. He was a comical guy. He said ‘The reason I’m saying that is because these knives are really sharp.” In typical cheeky fashion, Shirley asked “You got steel gloves?”

“But I got through it. That was an honor to cook there,” she recalls with a smile.

That bluntness and willingness to tell it like it is has been a refreshing and appreciated aspect of Shirley Bob’s personality.

“The First Nations patients, I go out and I greet them. I say do this, do that. And I do everything with them – I try to,” she says. “Some of them are good. Some of them you can’t get through to them.”

She recalls one man who came to treatment from the Northwest Territories and wasn’t a fan of therapeutic duties, especially in the kitchen (which most alumni recall as solid team and esteem building exercises).

“I could here was him saying, they are picking on us First Nations. I’d say No they’re not! He’d say “Yes they are. They’re making us slaves. I’d say I’ll get to you later.

“I stopped him and I explained to him First Nations are not picked on here. They are treated like the rest of the people. Orientals aren’t picked on. Nobody is picked on. You got to do your share, yes. But you will learn. You are in the kitchen now. You start from the dishes, to dining area, to kitchen help, mopping the floors in the evening. Mopping there. You got to go through all those steps. Nobody is picking on you. You’ve got breakfast lunch and supper. He said thanks.”

“So he started understanding. What a guy,” she says with smile and a shake of her head.”

For his part, Bob’s supervisor, Bridges manager Clay Sanders, says it’s not just the First Nations cultural aspects that made her such a valuable member of the Bridges Dining team.

“She’s a hugely interesting woman. She’s probably the most grounded employee I’ve got,” says Sanders. “I see calmness. I see an acceptance.”

He told how Shirley was a vital component a few years previous when a decision was made to smudge the kitchen and dining room area in First Nations tradition. And how another time she was instrumental in the provision of a just-like-home-cooked-dinner for a host of Nunavut patients who had arrived at Edgewood.

“I had to source some Cariboo,” says Sanders. “We ended up going through Rankin Inlet and getting it from the Trappers Association. So they shipped us a couple of boxes of frozen Cariboo. Shirley was a big part of that dinner and made some scow (bannock) bread as well.”

“If there’s anything I ever need from her, she would have no hesitation. She would give you the shirt off her back. She reminds me of my mom. A very dignified lady with a hell of a sense of humor.”

As she prepares to retire, Shirley says she wants to down size her house, and spend more time with her grandchildren. She will continue to help out at First Nations and family events and celebrations, on the Island reserves when asked, and in the school districts.

And she says she’s always available to work as a fill in for Edgewood if needed, though Sanders isn’t buying that willingness just yet. He’s seen others retire from kitchens.

“When I phone her and say hey Shirley, can I get you to cover a shift for me? I expect all I’m going to hear is her giggling. Before the no.”

For her part Shirley wanted to make sure all the staff and patients who came through Edgewood during her time know how much she appreciated working at the centre.

“I love all of the staff. It was so nice to work with every one of them. They had nice, touching smiles. They were friendly. They were all friendly. At least they said good morning!”

“I loved working with the patients. You see them come in, and two weeks later you see such a difference in them. Different expressions. They’re coming alive. That’s what I love to see. I’m going to miss that.”

“It’s been awesome. I came here to relax. It is a soothing place. Really soothing. To me it has been.”