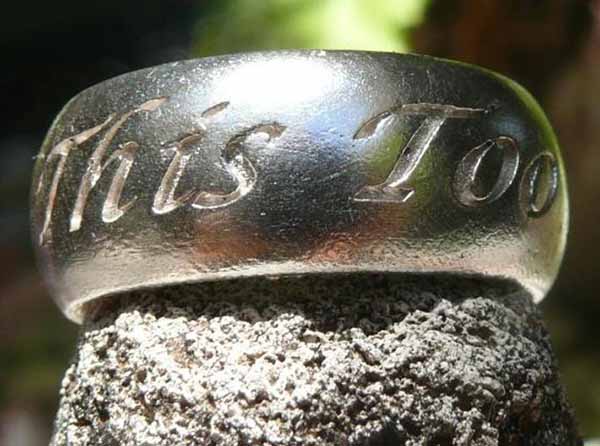 It’s not exactly something we say to ourselves when the landlord or the dealer’s buddies are pounding on the door.

This too shall pass.

It’s a slogan, a jingle, or an adage that many in recovery use to get through difficult patches. A death. A deadline. A health crisis. A traffic jam.

Though some in the 12 Step fellowships have taken it as their own, “this too shall pass” has a history steeped in wisdom as well as spiritual and philosophical context. The adage can be definitively traced back to the musings and writings of Hebrew, Turkish and Persian scribes, in particular, poets like Sanai (1080-1131) and the Attar of Nishapur (1145-1220).  The saying grew from a fable about a powerful king who was in search of a ring which would bring him happiness whenever he felt sad. His sages presented such a ring, with words to the effect of “this too shall pass” etched on it.

Over time, many story writers, poets and hymnists have created vehicles for the sentiment that sponsors love to use to comfort the rattled or grieving.

In the 19th century, English poet, Edward Fitzgerald, was writing about it. In 1852, he crafted the fable Solomon’s Seal, explaining how the adage had the power to make a sad man happy but, conversely, a happy man sad.

American newspaper editor and abolitionist, Theodore Tilton (1835-1907), reworked the concept when he wrote The King’s Ring in 1867, which noted that, though one could lose anxiety with the passage of difficult times, one should also expect the end of the good times, too. “This too shall pass” waves a double-edged sword.

The great Roman Stoic philosopher and statesman, Seneca, perhaps explained that side best.

“It is in times of security that the spirit should be preparing itself for difficult times; while fortune is bestowing favors on it is then is the time for it to be strengthened against her rebuffs.”

In other words, change is coming.

In modern times, former Led Zeppelin frontman, Robert Plant, recorded a song in 2010 with fellow musician, Buddy Miller, based on Tilton’s poem, Even This Shall Pass Away.

In one of the more widely circulated explanations of the slogan, before he became the United States’ 16th president, even Abraham Lincoln took a run at explaining the story of the Persian king who needed a ring to pick him up when he was down.

On September 30, 1859, the top-hat-wearing, bearded, up-and-coming Republican icon gave a 4,800-word speech to a collection of farmers in Milwaukee and dropped the mic with this:

“It is said an Eastern monarch once charged his wise men to invent him a sentence, to be ever in view, and which should be true and appropriate in all times and situations. They presented him the words: “And this, too, shall pass away.” How much it expresses! How chastening in the hour of pride! How consoling in the depths of affliction! And this, too, shall pass away.”

While Lincoln was referring to the debate over slavery, modern techniques in agriculture such as the steam plow, and the importance of farming and using the land and labour smartly, the point he was making was that, good or bad, history moves forward. Nothing remains the same. Things change every day.

One of the reasons the adage resonates so much with the recovery crowd is it reminds them that situations which may seem like a dead end – marital, employment, legal – can, and often do, turn on a dime. Some call them acts of providence. Some call them miracles. Others call them coincidences. No matter, changes happen.

“We, who have recovered from serious drinking, are miracles of mental health,” Alcoholics Anonymous co-founder Bill Wilson wrote in the Big Book in the chapter A Vision For You (p. 161). And in his own story on page 11 in the same book, “My ideas about miracles were drastically revised,” Wilson says.

Another popular saying may sum up the essence of “This Too Shall Pass”:

“The world is a wheel always turning,” American novelist Anzia Yezierska (1880-1970) once said. “Those who are high go down low, and those who’ve been low go up higher.”