Sex Addiction in the Gay Community – Recovery is All About Connection

The precise definition of sexual addiction has been debated extensively in research, clinical practice and even in the media.  It is often difficult to label or diagnose sex addiction; there can be disagreement about whether or not it is in fact an addiction, and the boundaries of what is considered “normal” or socially acceptable sexual behaviour can be vague.  What is clear, however, is that problematic sexual behaviours cause considerable distress to the individual, and despite negative consequences, the person is unable to stop. This can lead to a great deal of shame and a great deal of secrecy.  As sex addiction receives increased attention, we are learning that not all groups of individuals are equally affected by this problem.  For example, research has demonstrated that compared to heterosexuals, the rate of sexual compulsivity or sex addiction is higher among gay and bisexual men.  In order to understand sex addiction, it is important to understand why this might be. This increased understanding could inform treatment and ultimately improve the lives of all groups of individuals who suffer from this problem.

In a recent TED Talk, Johann Hari stated that the opposite of addiction was connection. While the talk focused mostly on addiction to substances such as alcohol and drugs, this notion can certainly apply to sex addiction.  The talk went on to explain that when humans are unable to connect with one another, they find something to fill this void and connect with it – whether it be alcohol, drugs or sex. When considering the difficult experiences of young, gay men and women coming to terms with, and feeling comfortable sharing who they are with others, it seems quite profound how this notion of connection (or the lack thereof) could in fact influence the development and progression of an addiction. Perhaps it is this problem with connection that may influence the disproportionate rates of sex addiction in the gay community compared to their heterosexual counterparts.

In our personal experience as therapists treating sex addiction, we have noticed an increase in the number of gay men seeking treatment for this problem.   We’ve also noticed that, in an attempt to explain or rationalize their behaviours, one of the first things our clients often say is that “all gay men do this.”  But of course, this is not the case.  And it’s our job to help our clients realize that despite their attempt to “normalize” this behaviour within the gay community, it is not healthy and ultimately does not explain or substantiate the problematic behaviour.

In the past ten years, the gay movement has made significant strides in providing equal opportunities for marriage, employment, and protection in society.  Through these advances, there has been a shift in how the general public perceives the gay community.  While this new viewpoint and acceptance is helping individuals accept sexual orientation and its open expression without shame or worry, it is important to remember that many gay men and women grew up and in the pre-acceptance era.  For years, they lived with the idea that their feelings were wrong.  Negative attitudes and messages from family members, friends, and other loved ones might lead to negative feelings about themselves and the perception that they were unable to fit in.

For this reason, gay men and women may still feel the need to manage impressions about themselves as they interact in their daily lives, for example when meeting new people or interviewing for a job.  For them, projecting an “accepted” image might minimize the likelihood of being perceived as different and being rejected. However, this constant impression management and the possibility of being someone they are not, can really erode one’s self-esteem and can leave the individual feeling conflicted about who they are and who they “should” be.  This dissonance can lead to the negative self-talk that, “part of you is wrong.” This internalized shame is something that the gay community has had to work through as it grows and tries to find its place and define itself as a community and as individual members. 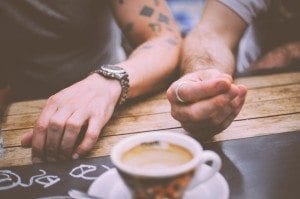 Without a true definition of who they are, and not having a strong sense of acceptance, many individuals in the gay community turn to relationships or sexual encounters to create that feeling of connection, validation and desire. With the advent of technology and Smartphone apps, finding the nearest sexual encounter is even easier.  As a result, the cycle of meaningless sexual acting out begins, if not intensifies, and the only way to feel wanted or accepted again is to perpetuate the cycle.

Within the gay community, “acting out” behaviours can be characterized as “cruising.”  Cruising can encompass a variety of activities, including anonymous sex in public places such as public restrooms, or using GPS apps for the purposes of obtaining sex.  Often, individuals will engage in these behaviours, regardless of the immediate consequences or risks to their health.  People will report that they have no control over the acting out; and feel helpless to resist the urge to engage in the behaviour.  The behaviour itself holds little significance.  What is important is the validation that an individual feels in the moment, and the false sense of connection that comes along with it.  Most people, both gay and straight, have sought out external validation from time to time.  However, for a gay person struggling with their sense of self, this external validation and need for connection becomes a driving force, allowing them to function in their daily lives. This dependency closes the cycle of addiction and makes it very difficult for the individual to break free.

If we accept that the opposite of addiction is connection, then one of the best tools to heal from an addiction is the establishment of healthy and meaningful connections.  This is true especially when looking at sex addiction in the gay community.  Making healthy connections that are not based on sex, but rather on a shared experience of being gay has been shown to help reduce the shame as well as to create a solid sense of self.  This is a large part of healing for any sex addict. Removing the barrier of shame so they can build self-acceptance and confidence in their sexual identities, as well as engage in a healthy relational process is crucial to a lasting recovery.  Getting connected to a recovery group and/or community that holds these notions as their foundation goes a long way in normalizing their experience, reducing negative self-talk, and fostering connectivity with others. It’s important to understand that how one experiences the world, and how the world experiences them, directly impacts their ability to feel accepted, loved and worthwhile. When they begin to feel those things, the addiction no longer has a breeding ground, and the process of recovery unfolds.

Intensive treatment involves defining what a healthy relationship is for the individual, and learning to communicate in order to connect authentically with others without the barriers of shame or self-doubt. This can be done through residential treatment, with 12-Step support such as Sex Addicts Anonymous (SAA) and/or Sexual Compulsives Anonymous (SCA), and working intensively with a therapist.

The gay community still experiences struggles of understanding and acceptance and this unfortunately can lead to slow social change to improve this problem. Even though societal movement and change may take years to unfold, it does not mean the individual recovery process should follow the same path. For anyone struggling with an addiction or problematic sexual behaviour, start with a step in the right direction. Start with connection.

Laura Politi MSW, RSW, CSAT (Cand.) is a registered social worker and holds a Masters of Social Work, a Bachelor of Social Work and a Bachelor of Arts in Psychology. She has clinical experience working in the fields of mental health and addiction, is currently in the process of training to become a Certified Sex Addiction Therapist and occasionally runs sessions and groups within the Sexual Addiction Treatment Program at Bellwood.