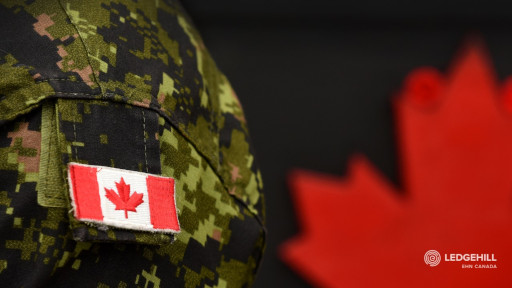 When two soldiers go to war and are exposed to the same conditions, why does one return with PTSD and develop a substance use disorder, and the other does not?

The answer to this question lies in the complex relationship between answering the call of duty and how it affects one’s deeply held values.

Colette says the field of moral injury can help frame how military members and veterans develop PTSD symptoms, which can lead to addiction behaviours.

She says a key element of the job is operating in “grey zones” that require making decisions that can risk lives.

For example, being ordered to stand down while trucks are driving by, containing children that are being used for sex trafficking. Or, having to take a respirator off a person’s face in order to save another.

An individual understands that they have certain values that are important to them. As a result of doing their job and following orders from those above them or even sometimes giving orders, they are contravening their own deeply held personal moral values. So there’s a lot of shame and guilt involved in that.

Does Being in the Military Make You More Vulnerable to Addiction?

Approximately 8% of Canadian military members develop PTSD symptoms. Additionally, it is common for individuals with PTSD to also have a substance use disorder.

However, it is not the case that if an individual enlists in the military, that they are bound to develop PTSD.

Colette says there are factors that influence whether an individual will develop PTSD, including:

When military members and veterans develop PTSD and enter addiction treatment centres, their PTSD is treated as an operational stress injury.

An operational stress injury (OSI) refers to long-term emotional and psychological issues experienced by individuals working in law enforcement, combat, and related fields where being exposed to traumatic or high-stress situations is a regular part of the job.

Military members and veterans can get PTSD “as a result of the job they do,” says Colette.

Military culture orientations are conducted at EHN’s treatment centres to ensure that staff understand the unique needs of military members and veterans—down to where chairs are placed in a room.

“It can be just the tiniest nuances like putting their chairs against the back wall of the auditorium,” says Colette. “They can’t have anybody walking behind them, they can’t stand it, they won’t even be paying attention to what you’re saying, they’re jittery—hyper-vigilance is one of the symptoms for PTSD.”

Additionally, the treatment curriculum includes evidence-based treatments that address how the calling to serve others can sometimes injure the self.

Colette says Cognitive Processing Therapy and Exposure Therapy, the gold standard therapies for PTSD, may not fully address the dynamics at play with moral injury.

“They don’t get to this sense of shame and guilt,” Colette says. “Telling me that’s the way it went down, or how could I have done it differently, I was just following orders, isn’t addressing my sense of contravention of my own deeply held moral standards.”

Colette says adjunctive therapies like Adaptive Disclosure Therapy can help with concepts like self-forgiveness—resolving that sense of self and the values that an individual had to contravene during their work.

“It’s reality therapy, really, so that I reinforce for myself that I am a good person,” says Colette.

How can Canadians support military members and veterans each year?

Colette says she sees a lot of lip service paid—a flash of a red poppy looks great on a black peacoat—but not a lot of depth to understanding what’s behind the uniform and how individuals suffer in the line of duty.

Colette, who is 27 years in recovery from alcohol addiction, and lived through apartheid in South Africa, encourages people to meet a military member or veteran to experience them one-on-one, as individuals.

Military members statistically have larger challenges with substance use than the general population. However, not every military member develops PTSD as a result of the job they do, and individuals with PTSD who develop a substance use disorder are not defined by their addiction.

Addiction and mental health treatment can be life-changing, enabling an individual to manage crippling PTSD symptoms and become engaged in family life once again.

Ledgehill’s two facilities in Annapolis County, Nova Scotia, provide gender-specific treatment for men and women who need to heal in a peaceful, supportive environment free from fear or distraction. If you’d like to learn more about the addiction and mental health treatment programs provided by Ledgehill, enrol yourself in one of our programs, or refer someone else, please call us at 800-676-3393.

Thank you and stay safe,

The Healthcare Team at EHN Canada