Home / EHN Blogs / One Day at a Time: a slogan bonded in recovery principles

One Day at a Time: a slogan bonded in recovery principles 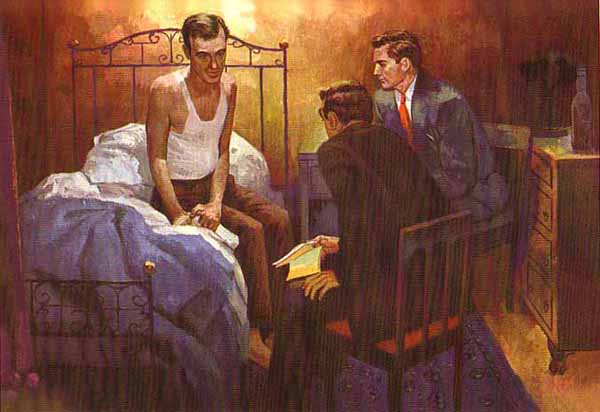 A popular television show named itself after it. Several world-famous singers have used it for hit songs, too. Scriptures of several religions hold it up as sage advice. Yet, somehow, the fellowship of Alcoholics Anonymous probably has the tightest grip of anyone on One Day at a Time.

One Day at a Time has roots in recovery that go back to the very first man Dr. Bob and Bill W. succeeded helping in the summer of 1935.

Bill Dotson was a brilliant, smooth-talking lawyer when sober, but just add alcohol and he turned into one nasty piece of work. Hospitalized eight different times in his last six months of drinking in Akron, Ohio, A.A. Number Three was known to be physically violent with nurses. By the time Bill and Bob made it into Akron City Hospital to try to convince Dotson that they could help him get and stay sober on June 26, 1935, he had already blackened the eyes of two nurses and had been ordered strapped down to his bed.

Dr. Bob had him transferred to a private room. The famous painting, known as The Man in the Bed, was created for the 1955 December Grapevine, depicting a scene from those visits.

As Bill and Bob unpacked the news about his addiction – how it was not a phase, that it was progressive, and how he was destined to end up again in hospital, should he pick up another drink – Bill D. responded on page 187 of the Big Book.

“Yes, Doc, I would like to quit, at least for five, six or eight months, until I get things straightened up, and begin to get the respect of my wife, and some other people back, and get my finances fixed up and so on.”

“They both laughed very heartily,” Dotson would say in a recorded talk given in Canton, Ohio on New Years Day of 1950.

The doctor and the stock market analyst hit Dotson with both barrels, including the need to accept powerlessness, ask for help, turn to God, share with another person the anger and resentments one carries, and make restitution for harms done. But, one of the most poignant moments of that first successful 12th Step occurred when they told Dotson about how important it was to take things a day at a time.

“The next question they asked was, ‘You can quit twenty-four hours, can’t you?’” Dotson said in his recorded talk. “I said, ‘Sure, yes, anybody can do that for twenty-four hours.’ They said, ‘That’s what we’re talking about. Just twenty-four hours at a time.’ That sure did take a load off of my mind. Every time I’d start thinking about drinking, I would think of the long, dry years ahead without having a drink, but this idea of twenty-four hours, that it was up to me from then on, was a lot of help.”

So, the slogan One Day at a Time was used from the very first 12 Step calls, mere days after Dr. Bob had had his last drink.

Bill saw it as effective advice for newcomers.

“Most people feel more secure on the twenty-four-hour basis than they do in the resolution that they will never drink again. Most of them have broken too many resolutions. It’s really a matter of personal choice; every A.A. has the privilege of interpreting the program as he likes.”

So, if One Day at a Time was coming out of the mouths of the co-founders of the 12 Step movement, where would they have come up with it? One likely source is the Good Book, which predated A.A.’s Big Book by hundreds of years. Many Bible study guides point to the saying.

The Our Daily Bread Ministries, founded in 1938, writes this on its website at odb.org:

“The thread of living “one day at a time” is woven throughout the fabric of Scripture. God supplied the Israelites with manna daily (Ex. 16:4). Our heavenly Father’s mercies are new every morning (Lam. 3:22-23). Jesus taught His followers to ask for their “daily bread” (Mt. 6:11) and to refuse to worry about tomorrow (v.34).”

Perhaps no scripture passage rings the One Day at a Time chime louder than the Gospel of Matthew, who wrote in Matt. 6:34: Therefore do not worry about tomorrow, for tomorrow will worry about itself. Each day has enough trouble of its own.”

Given the daily readings from the King James Bible that Dr. Bob, his wife Anne, and Bill relied on in that summer of 1935, it would make sense that One Day at a Time was so profound to the first A.A. members.

In official A.A. conference-approved literature, the One Day at a Time philosophy is spelled out clearly for newcomers. Perhaps nowhere is it more succinctly explained than in the A.A. pamphlet This is A.A.: An Introduction to the A.A. Recovery Program, copyrighted in 1984.

“For example, we take no pledges, we don’t say that we will ‘never’ drink again. Instead, we try to follow what we in A.A. call the ’24-hour plan,’” the pamphlet reads.

“We concentrate on keeping sober just the current 24 hours. We simply try to get through one day at a time without a drink. If we feel the urge for a drink, we neither yield nor resist. We merely put off taking that particular drink until tomorrow.”

Anyone who has been sober for a couple of decades or longer will likely be familiar with one piece of literature called Twenty-four Hours a Day. Published in 1948 by Richard Walker, this handy little black book was the predecessor to A.A.’s Daily Reflections.

Walker, who was a member of the first A.A. group in Boston in 1943, wrote, “If we don’t take that first drink today, we’ll never take it, because it’s always today.”

Expanding his theme to 365 daily readings, Walker’s little black book has sold over nine million copies through Hazelden. Walker explained his One Day at a Time philosophy this way:

“Anyone can fight the battles of just one day. It is only when you and I add the battles of those two awful eternities, yesterday and tomorrow, that we break down. It is not the experience of today that drives us mad. It is the remorse or bitterness for something that happened yesterday or the dread of what tomorrow may bring. Let us therefore do our best to live but one day at a time.”

According to AAAgnostica.org, Walker died in 1965. He had 22 years of sobriety.